Buckwheat as a microgreen,support for garden pests, attractor of beneficial insects, and soil enrichment

Wow, if you haven't grown buckwheat as a microgreen or as a cover crop or pest deterrent, check out this article and look forward to many benefits of this valuable plant.
This is an excerpt from a much more comprehensive view of buckwheat:  http://www.growveg.com/growblogpost.aspx?id=184

Buckwheat flowers attract honeybees and other pollinators with theirmorning nectar flow, but they also support healthy populations of smaller beneficial insects. Mounting evidence suggests that blooming buckwheat give a significant boost to important beneficial species, particularly hoverflies (properly known as Syrphid flies but commonly called hoverflies because of their seemingly effortless ability to hover). On both sides of the Atlantic, researchers are finding that growing buckwheat nearby can deter pests of potato, broccoli, green beans, and other vegetable crops, in part by providing abundant food for female hoverflies. Most hoverfly larvae are too small to see without a magnifying glass, but they are voracious predators of aphids and other small, soft-bodied insects.
Organic growers who use buckwheat as a primary pest-prevention strategy have found that it’s important to grow buckwheat within about 20 feet (6 meters) of crop plants, which is easily done in a garden. Upright yet spindly, buckwheat plants have such shallow roots that they are easy to pull up with the flick of a wrist. A few buckwheat seeds sown among potatoes are known to confuse potential pests, and a broad band of buckwheat makes a fine beneficial backdrop for strawberries. Throughout the summer, I sow buckwheat in any spot bigger than a dinner plate that won’t be planted for a few weeks. With good weather, buckwheat can go from seed to bloom in a little over a month.

Here are my two uses: as a microgreen..and as a cover crop and support for my raised bed garden.
The microgreens are easy to grow and are pretty hearty in size and very mild in taste. 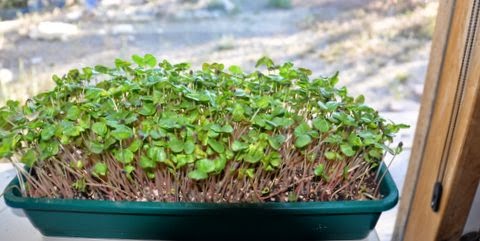 As some of you heard, I didn't plant my garden until late July (except for buckwheat cover crop). So I have a rich crop of buckwheat nourishing my soil (which was rather depleted). I removed a lot of it today as you may be able to see in the last photo. 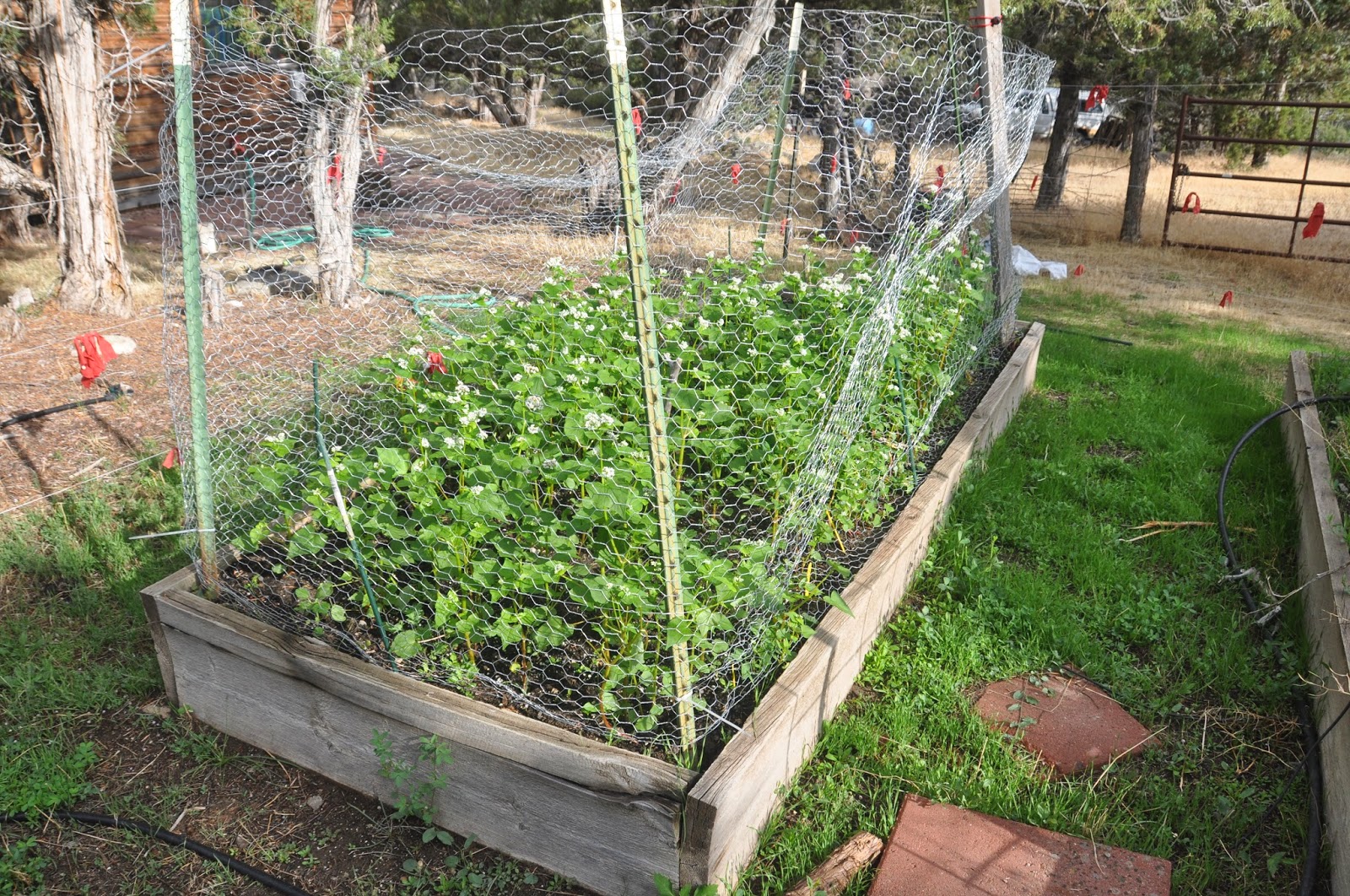 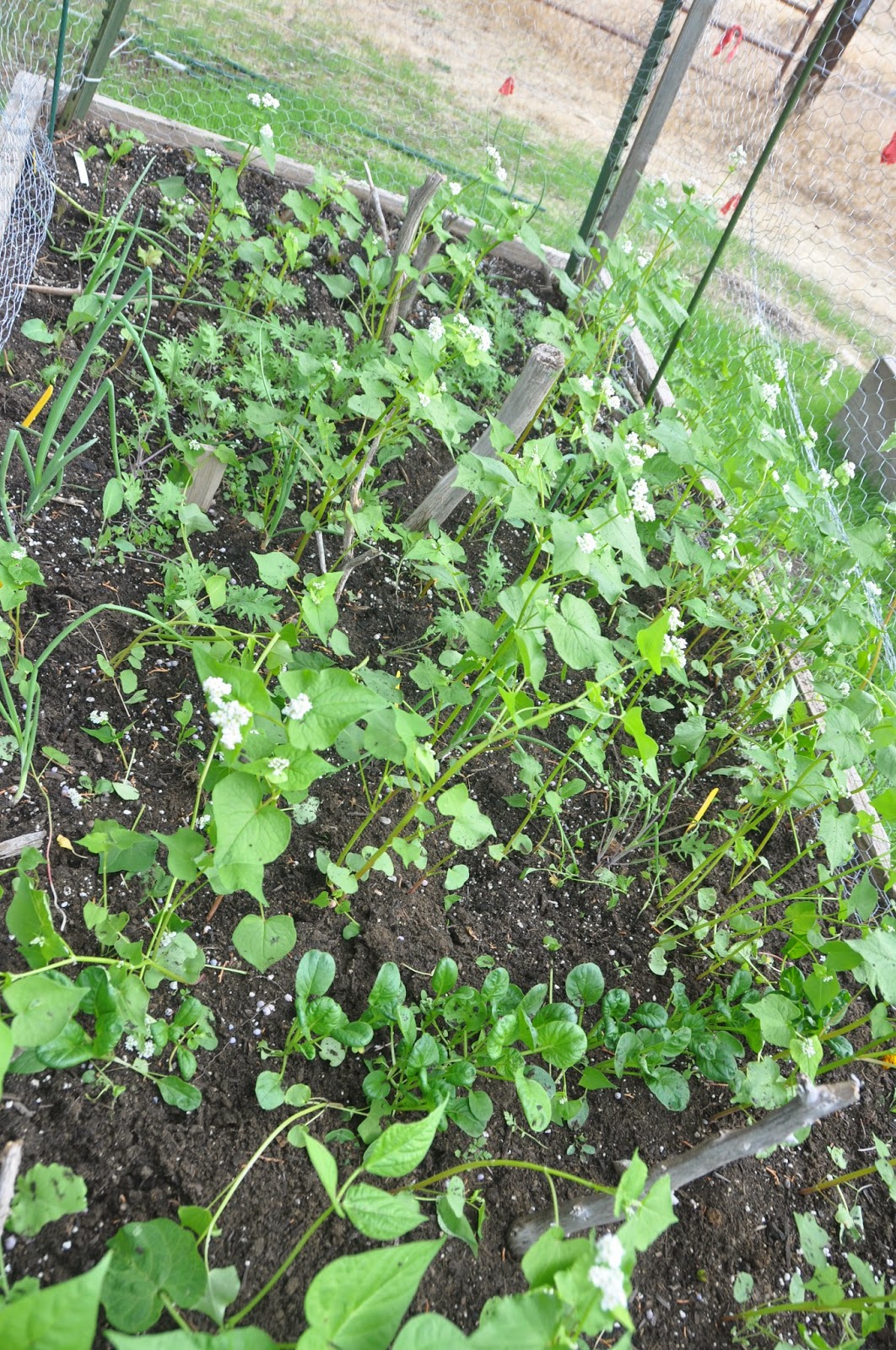 I am hoping to harvest a few green beans, beets, tatsoi, kale, spinach, lettuce etc. and maybe a cauliflower.
What are you growing in your garden?
Posted by Unknown at 9:27 AM